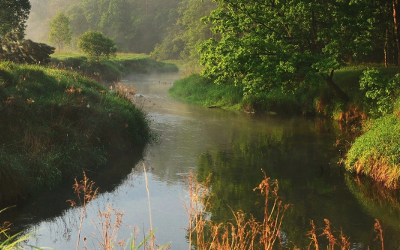 The planned investment scheme includes three areas (sports, recreational and residential) located in the center of Stodoły – the smallest of Rybnik’s districts. The site is just below the dam of the Rybnik water reservoir, on the edge of a vast forest complex stretching from Rudy Raciborskie up to Kędzierzyn Koźle.

The sports and recreation center is to be built in the place of a former horse farm. On the plot, there is a historic post-Cistercian manor house from the 18th century, along with farm buildings, and an abandoned hall of a riding school and stables built later. The stud also owned an approximately 200 m open riding hall, where the location of the housing estate is planned. There are two sailing centers on both sides of the reservoir within a few hundred meters of the planned investment. Both plots are bordered by the Ruda river.

A kayak center lying on the opposite bank of the river at the north-eastern corner of the sports and recreation area is the starting point for rafting on one of the most mesmerizing canoe routes in Poland. The bicycle route running through Stodoły starts in front of the Minor Basilica in the city center. It runs along the Ruda river and the banks of the Rybnik Lake up to the network of paths stretching across the Landscape Park. In the near future, it is planned to extend the line of the historic narrow-gauge railway from Rudy Raciborskie to the station in the area of the planned sports center.

The area of the resort was divided into functional zones. A high standard restaurant was designed in the historic manor house. The building is adjoined by a flower garden and a small courtyard next to farm buildings, which are to be occupied for small commercial premises offering local agricultural and craft products. In the middle part, there are two sports halls – the main one, adapted from the building of the former riding school and the tent hall intended for four year-round tennis courts. A cloakroom with a gym, training room and mini spa have been designed for the main hall. In the northern part, a “western” restaurant will be created in the former stable building and recreational colloquium will be created.

The whole resort is lined with two loops of illuminated roller track, which in the winter will be transformed into an artificial
snow track for cross-country skiing.

The success of the sports and recreation center is guaranteed by its excellent location and a varied program offer complemented by the neighboring sailing and canoeing centers and the entire Landscape Park attracting residents of not only the Rybnik Agglomeration but the entire Upper Silesia Conurbation.

Four types of users group for the resort throughout the year:

1.The residents of the estate and the district of Stodoły.
The sports complex in the near-immediate neighborhood is to be one of the most important reasons for living on the proposed housing estate. All-year tennis courts, sports hall, gym, spa, paddle, volleyball and badminton courts, a track for skaters (in winter for cross-country skiers), outdoor gym, extensive areas for running and cycling, water sports are strong elements for buying a flat here. The resort, regardless of the weather and season, you will be able to wear sports clothes, and the frequency of using its services can be assessed several times a week.

2.Inhabitants of Rybnik.
From the city center and the largest 40-thousandth district of Rybnik – Nowiny, the resort is a few minutes by car and less than half an hour by bicycle. Because all sports centers in the city are overcrowded and do not have such a wide program offer, it should be assumed that a significant part of residents will decide to permanently use the center’s services.

3.Seasonal mass recipient.
In the summer season, especially on weekends, the Rybnik lake and Rudy Raciborskie are visited by families with children, groups of young people, cyclists, and walkers. The connection of the narrow-gauge railway line of the resort area with stations in Rudy and Stanica will induce some of these people to visit all places on the same day. For these recipients, the northern part of the center is designed mainly near the railway station and the building of the former stable housing a western-style gastronomic establishment. Additional attractionsare designed there – a miniature golf course, a playground, and a climbing wall

4.Organized groups.
The team is prepared to receive organized groups. In cooperation with neighboring centers – kayaking and sailing, and based on their own base – tennis courts – rafting, regattas, and tournaments can be organized as independent events or as part of a multi-day training and integration program combined with outdoor activities. As for accommodation facilities for larger groups, dozens of accommodation rooms of various standards are designed – high in the attic of the Cistercian manor house and slightly lower in the attics of farm buildings next to the manor house and in the narrow-gauge railway station building.